The story of the legendary weapons company Birmingham Small Arms Company (BSA) began in 1854, by combining the fourteen largest Birmingham gunsmiths. But what happened the drop in demand for weapons, forced the owners of the company to pay attention to motorcycles and bicycles. And in 1880, the company built its first BSA bicycle, and in 1910, 500 cc motorcycle.

Later in the war, the company produced a large number of military motorcycles. Lightweight single-cylinder 250 cc motorcycles were pre-war models with nizhneklapannym C10 and C11 engine with overhead valve. The main advantage of these bikes were low fuel consumption, only 3 liters per 100 kilometers and the highest speed reached 110 km/h.

But mostly for the military motorcycle was a motorcycle BSA WM20, who had a 500 cc single cylinder head engines capacity of 13 hp Weight of the bike was 170 kg and a maximum speed of 105 km/h. In total, during the war produced about 126,000 motorcycles Series WM20.

The biggest motorcycle of the time was BSA G 14 who had a 968 cc V-twin engine with a capacity of 24 hp There were a version with a sidecar, and without. 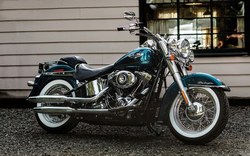