History Buell motorcycle company began in 1983. The company was founded by Erik Buell who was an engineer of Harley-Davidson. In the past, Erik Buell was a mechanic and customizers, as well as a professional motorcycle racer. In the workshop of his home in Wisconsin, Buell decided to do the production of sports motorcycles. The basis for the new bike was the motor Harley-Davidson XR750.

All the bikes are created by Buell always different innovative approach to chassis design, especially with markedly in comparison with motorcycles Harley-Davidson. Motorcycles companies are always equipped with a light chassis with modern suspension and braking systems.

In 1987-88 some 50 vypushennyh motorcycles of this model equipped with overhead valve engine XR-1000. Later, the company switched to production of the new model RR1200 1,200 cc engine Sportster Evolution. Since then, all Buell models were equipped with modified versions of the 1200-cubic V-twin engine. After enjoyed moderate success RR1200 (all were released 65 machines) in 1989, created the first model of double Buell RS1200. After 2 years, was created single sports model RSS1200. At that time, the inverted telescopic forks and large effective disc brakes have become the norm on motorcycles of Buell, and the company has received recognition and credibility in the motorcycle world.

By the end of 1992, the company produced about 450 motorcycles and brought its founder a solid reputation in the engineering and design community. Apart from the use of engines Erik Buell had other communication with the company Harley-Davidson. In the early 1970s he collaborated with her on creating a model Sturgis with belt drive.

In February 1993, the company Harley-Davidson acquired a 49 percent stake in Buell. Association with such a large company has given an opportunity to Buell rapid development of, and access to the expertise of the parent company. The company Harley-Davidson as a result of this association has received more models and access to creative engineering of Buell. After the merger, all models are sold both companies together.

In 1998, there was a complete shift of the corporation Harley-Davidson Motor Co., Which allowed expansion of the dealer network throughout the world and a huge investment in the development of innovative models. 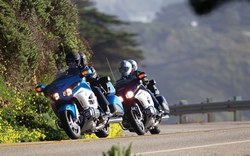