Its founder, Soichiro Honda was born into a poor family of 17 November 1906. Soichiro father was repairing bicycles since childhood and the Honda developed an interest in engineering. In early childhood, when he first saw the car, he had a dream of one day becoming a car owner.

Honda graduated from high school in 1922 and immediately went to Tokyo, where he enrolled student in the repair shop. In 1928, he scraped together the money and opened his first repair shop in his hometown. In the same year, he received the first of his many patents for the idea to replace the wooden spokes of the wheel on the road metal.

Honda has become known for its invention in 1938, the piston ring. He opened his own factory to manufacture rings for Toyota. An earthquake in 1945 completely destroyed the factory, Honda sold everything and went to work part-time. Engaged Honda motorcycles can be said casually. In 1946, Honda was faced with a problem - he has no fuel for the car, then he took one of the motors and have attached it to his bicycle. Then he began to make such mopeds at the request of friends. Having done a dozen of these orders, Honda realized that the market for such a machine could be much larger.

In 1948, Honda established the "Honda Motor Company" for the development and production of mopeds. In the early 50's Honda broke into the industry in the production of motorcycles and for 5 years has bypassed the majority of its competitors. By 1963, "Honda" has become a leader in the motorcycle industry in virtually every country of the world, confidently beating Harley-Davidson and the largest Italian companies manufacturing motorcycles.

But despite the overall lead in the motorcycle industry, the company has a lot of Honda's competitors, particularly strong other Japanese motorcycle manufacturers - Yamaha (Yamaha), Suzuki (Suzuki), who are often ahead of Honda in some specific types of motor vehicles (such as sports bikes or quad bikes ). Honda is a constant rivalry with the Italian manufacturer of sports motorcycles in the United States take on the legendary former force local manufacturers - Harley-Davidson and Indian, inexpensive motorcycles capture market Chinese companies. And in this competition are born true motorcycle masterpieces. 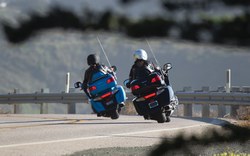