Swedish brand with a century of history. One of the manufacturers whose products are the subject of the most careful attention to the market, off-road motorcycles due to its sporty image (42 world titles won in the disciplines ENDURO and Cross).

Armory company Husqvarna, leading its history back to 1689, produced the first motorcycle in 1903. The typical design of that time received single-cylinder four-stroke engine FN (1.5 hp) and direct belt drive rear wheel. The First World War led to the cessation of the supply, and in 1916 the company Husqvarna has developed its own production of similar engines. At first, they were offered in two versions - 550 cm3, 5 hp and 941 cm3, 11 hp New bikes have a three-stage gearbox and chain drive the rear wheel.

In 1930, the company launched the Husqvarna model "50" with a single-cylinder overhead valve engine (491 cm3, 20 to 30 hp). At the same time began to develop a racing car with a two-cylinder V-twin overhead valve 500 cc engine. This machine is from 1932 to 1935 brought the company four consecutive victories in the "Grand Prix of Sweden." She also contributed to the international debut of the brand, before totally unknown outside of Scandinavia.

In 1936 replaced all previous schemes come easy with a single-cylinder two-stroke motorcycle engine capacity of 98 cm3 and a two-stage gearbox. In 1939, the engine capacity increased to 118 cm3, a transmission, a third gear. Production continued until 1953, when the stage came the famous Drombagen - extremely lightweight (75 kg) device with a single-cylinder two-stroke engine (174 cm3, 9 hp), three-stage gearbox, closed tubular frame and a tilting rear wheel. He became the basis for the creation of off-road sports options.

Sporting success led the company to a natural solution - stop not bring much profit production of motorcycles and focus on the manufacture of off-road sports cars, which have gained special popularity in the rich American market. In the mid-60's debuted an upgraded series of motocross motorcycles with two-stroke engines in working volume of 244 and 360 cm3, interlocked with a four-speed transmission. She brought a new Husqvarna series of victories in the World Championships: Hallmann won in the 250 cm3 in 1966 and 1967, while his compatriot Bengt Aberg in 1969 and 1970, won the world title in the class of 500 cm3.

Following the trend of returning to the sport four-stroke engines, in 1982, the Swedes introduced a model «500WR» with four 503-cc air-cooled engine, and the season of 1986 included a new "liquid" powerplant.

A complete surprise was the 1986 sale of the rights to the brand, distribution network and a license to manufacture motorcycles Italian concern Cagiva. In the next year in Italy began manufacturing sports Husqvarna motorcycles with two-stroke and four-stroke engines (from 124 to 503 cm3). Following sports equipment followed "civilized" version. 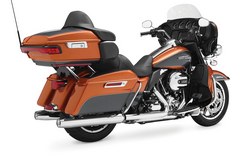