When, in 1949, Francesco LAVERDA, agricultural machinery factory owner, built his first motorcycle - an easy 75-cc machine, he did not dream of coming glory.

In 60 years at the initiative of his son Massimo company began manufacturing motorcycles large cubic capacity, which will eventually courted cult popularity. In the late 80s the company's business faltered, and she has repeatedly found itself on the brink of bankruptcy. In summer 2000, the new owner of the company was the Italian company Aprilia.

Now company consists of sport-touring bikes with engines of a capacity ranging from 650 to 750 cm3. On the way - a motorcycle with a three-cylinder 1000 cc engine. 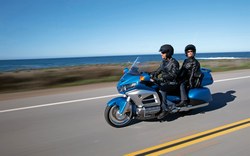