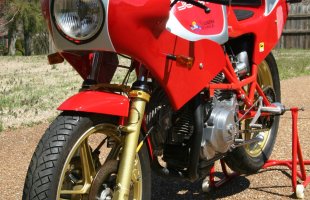 The NCR story started in 1967. and continues to this day. They became one of the worlds foremost race teams. and have spawned many technical advances and world championships. Their logo of a fiendish leg spinning helmeted dog is instantly recognizable the world over.

It all started when three partners Giogione Nepoti. Rino Caracchi and Rinaldo Rizzi produced racing conversions from standard production machines. Their workshop at 35 Via Signorini was in Borgo Panigale. a long stones throw from the Ducati factory on the western outskirts of Bologne. By the late 60s. partner Rizzi had left the company and NCR became NCRacing. The R in NCR becoming the R for racing.

Their first historic success came in the 1972 Imola 200 when Paul Smart won the event. followed by teammate Bruno Spaggiari. The factory Ducati team knowing that the independent NCR was doing better than them decided to disband and join forces with NCR. They became the semi official Ducati team and were known as Scuderia NCR. The Scuderia means stable in Italian and has the same meaning a team in English. The team consisted of Ducati race technicians Mario Recchia. Giuliano Pedretti and Piero Cavazzi. team director Franco Farne and technical advisor the truly legendry Dr. T. Fabio Taglioni.

The racing success of the 750 and 900 twins are well noted especially in endurance racing. With race wins at the Isle of Man T. T by Mike Hailwood in 1978 being maybe racing most celebrated victory. Other noted victories include the 1973 Imola 200 with Claudio Loigo. The 1973 Barcelona 24 hour with Salvador Cannellas and Benjamin Grau. The 1974 Italian regions T. T with Vanes Francini and Mauro Ricci.

But it is the early 1980 with the belt drive Pantah engines that gave Scuderia NCR their most success. From 1981 with the TT2 thru the F1 era of 1985. Scuderia NCR dominated the world F2 and F1 scene. With great victories credited to Tony Rutter and Walter Cussigh and Marco Lucchinelli to name a few.

Scuderia NCR continued until Ducati took their race shop back in house in the early part of the century. But NCR was able to teach it's old masters new tricks by winning against the factory team with Ben Bostrom in 2002.

In 2006 founding partner Nepoti and his wife were tragically killed in an automobile accident. Leaving Rino Caracchi and his son Stefano to continue. They now compete as Team SC Caracchi with Triumphs and Ducatis.

The NCR name and logo were sold to the Poggopolini group. They were expert machinist in the aviation. boating. aeronautical and cycling industry. They needed a well known brand to showcase their talents. Today they produce some amazing and expensive machines.

This bike is a 1980 Scuderia NCR TT600. It was the first NCR designed frame for the Pantah. The first racing Pantah's of 1979 used Ducati frames. In 1981 came the well known TT2 designed by Taglioni. The lesser known TT600 of 1980 was offered in two styles. About ten were built in panthilever (cantilever in English). and one in twin shock. Very little has been written or recorded about this model. But scouring he internet has revealed many photographs of most of the others. My estimation is that there were just two 'Works' bikes. These had silver frames. One is still in Rino Caracchis workshop. the other was last seen in rather poor condition in France after conversion to a street bike having last been raced by Team CVM. I believe about eight were sold a 'Race Kits'. There are examples in Australia. Sweden. Italy and Germany.  Some of these bikes now look like street bikes. but are converted former race bikes. There was in my opinion only one 'Road Kit' Scuderia NCR ever built.

The 'Road Kit' is different from the 'Race Kit' because of the following.

1/ The race kit had an all fiberglass tank/seat unit with a clear strip as a fuel level indicator. The road kit has an alloy gas tank which blends into the fiberglass seat unit.

3/ The race kit has lightening holes in the steering head side plates. The road kit has none.

5/ The race kit does not have frame numbers. This Velicchi made frame has a factory stamped frame number with stars.

This bikes was first registered in March 1981 to a Norbert Weicht of Hamburg. It then changed hands twice whilst remaining in Germany. The last owner since 2005 did a full service of the machine including belts. fluids and tyres. To prove that it is a genuine original machine. you can see photographs of the bike during it's final build during the early 1980s. It's on Rudi's Pantah Site at pantah. eu. under 'racing and specials' and NCR. I have another set of eight pictures taken outside at the same time. The bike had not yet been started because the exhaust pipes were still shiny. The chain was not yet fitted as it was awaiting the Ducati logo sprocket cover. The belt covers were not yet modified for the new frame.  The bike is now located and titled in the United States but is available for world-wide shipping. The mechanical and cosmetic condition is excellent having covered very few miles from new. I have ridden the bike once around the neighborhood. The digital speedo is an after market accessory and does not record miles covered. To return it to original. simply unbolt it. There is also a small dent in the NCR stamped exhaust system.

This truly is a one in a life time chance to own a unique piece of Ducati history.

Payment in British Pounds in either cash or cheque is available to UK customers only. US Dollars via wire transfer to US for all others. 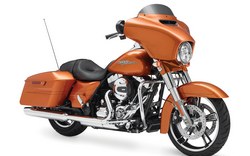