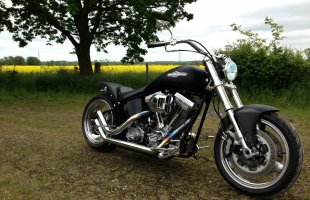 Firstly I cant believe I'm doing this. but i am putting my pride and joy up for sale !!!
Its based on a Harley Softail and it even has a Harley badge.  it draws crowds and everyone says oh wow a Harley. but the thing is way better than a Harley. but people are draw by the badge.  The engine is a monster. 1600cc tuned S&S engine.  I also own an R1 and the big difference is. yes the R1 is quick and you have to hold on. but this thing punches you forward. serious amount of power.   Let be honest it's a pose around town on at the weekend bike. or pull up at the country pub and look cool.  Your not going to tour Europe on it. the thoughts nice but you wouldn't.  the noise for one thing !!!  i know your reading this thinking yeah i'm sure its not that loud !!! Ear plugs are recommended.  At the last MOT the guy said he couldn't fail it for the noise because the ruling is that it can not be louder than what it is suppose to be. and it isn't.  he said it was the loudest thing he has ever herd in 20 years of doing MOT's.  But is a good loud. that twin just purring !
So it goes the wind. it sounds like a hurricane. what does it handle like.  Oh dear !!! well it has the best wheels. brakes and forks you could wish for.  I recently took it back to the company that did most of the work on it and next to them is a moto GP race team.  and the Wheel. Forks and Brakes have come from them. from their race bikes. Which is a bit of an over kill to be honest. because with the low ground clearance it can catch the pegs.   Its a different ride. im used to throwing my R1 into a corner and coming out of it.   With this you have to take your time around the corners then open it once you have come out. rather than when you are 2/3s of the way around.
The description below is what i was given when i got it.  I have since had an HID bulb fitted.  Which is amazing and cost about £250.  I have had pillion pegs fitted and have a dual seat. again this cost about £250. Also a new air filter. with flaps. increases the HP ( altho it dosnt need it ) this cost £400.  Fitted some mirrors and two weeks ago spend £200 having it detailed. a guy spent two days polishing it and covering the chrome with a special wax.
My daughter came over at the weekend. so i took her for a spin on it. pics 5 and 6 are her with the bike. with the dual seat fitted.  i dont like the look with the dual seat. so i only put it on when someone wants a ride.  But the pictures are so you can see what it looks like.

I could go on and on about it to be honest. you really need to come and have a look.   There is a short youtube video link at the bottom. you cant hear how loud it is on the video tho. i could do a long video. looking around and riding the bike. if someone wants to. before traveling to look.
So why am i selling it? I do about 100 miles a year on it. I usually just look at it an clean it. and i fancy a speed boat !
Feel free to send a text with silly offers. I know i will get them. so feel free. It doesn't cost anything for me to press delete.  This bike has cost an obscene amount of money to get it like this.  I cant think of anything more to do to it. without going over the top.
BTW the R1 is not for sale so don't ask. and neither is my daughter !!
If the asking price is paid then i will throw in a genuine Haley Davison Jacket. never worn. its a XL cost £499. brought it and tried it on. but never used it.  Love the t shirt and shorts look on this bike and its never seen the rain or cold weather.
It has had 5 previous owners and is registered as a 2007. but it has only have 2 riders.  like every custom bike it has a long but interesting story. one which i will share with the new owner.
If it doesn't sell then i wont care to much. it will still be worth the same money in 12 months time.
phone number   07817587917