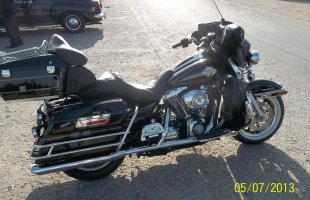 Harley - Davidson FLHTCU
Thanks for looking at my 2007 Harley Electraglide Ultra Classic. Finished in vivid black. it looks stunning. It is a 96 cubic inch motor (1584cc) with a six speed transmission. It has covered 25700 miles. Mot'd till April 14.  Taxed until end of SeptThe bike has been stage one tuned and pulls with all the power you would expect.  Fitted with Vance & Hines big ovals. which gives it a nice throaty sound. It has also had highway pegs fitted along with extra rear lights with chrome surrounds.  It also has an 'easy up' center stand and a chrome rack fitted to the  touring box.  Chrome covers are fitted to the rear footboards. Good condition Avon Venoms are fitted front and rear. the front is also a whitewall tyre. Full Harley stereo radio CD/MP3 system with intercom and CB. Two headsets and leads are included in the sale. Other standard features include; cruise control. oil pressure guage. ambient temp guage. clock (on stereo screen). cigarette lighter socket. fuel guage and voltage meter. It has the full harley security system and i have both fobs. I have Harley liner bags for the two side panniers but not for the top box. Everything on the bike works as it should do and rides very well. There are one or two minor  cosmetic imperfections as you would expect on a bike of this age.  The two brake master cylinders are showing signs of paint corrosion where fluid has been spilt at some time in the past. A small chip on the front bumper laquer. Front fork lowers are showing signs of surface corrossion (as they nearly all do by this age)I have doubts about how good the battery is. so i will fit a new one this week.
Please feel free to ask questions or come and have a look. I am 5 miles form Portsmouth. I can be contacted via Motorcycles-for-sale or mobile. 07971 065794.  Roy.
£100 deposit within 24 hrs of winning bid. Balance before collection.
Thanks again for looking. 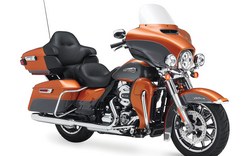