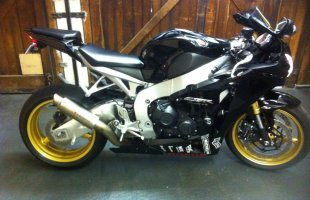 I bought my black Fireblade new from Dobles Honda. It is a 60 plate and only just done over 2000 miles. It is a fantastic bike still in showroom condition apart from a new race fit exhaust which will be sold seperately for £300. You wont find a better pipe for this bike. The bike has full Honda Service history. Tax until end of Fed. MOT will be due September 13. It has R & G crash bungs. tail tidy. datatool alarm and immobliser all fitted by Dobles Motorcycles. LED rear light with intergrated indicators. I just dont get the time to use the bike and has not been rode for about a year. It has never seen the Rain ! Very sad to sell my bike major lack of use and my wife wont let me put in the front room. No time waisters. no test rides. Collection Sutton Surrey 07977 564 223