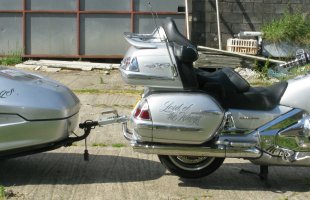 Hi and welcome to my auction. I have had this bike and trailer from new and had some fantastic trips with it. meeting a lot of new friends along the way. As you can see I have added a lot to the bike making it quite unique. however some of the add-on's have pitted and would need to be replaced. I have just replaced the battery as the bike has been stood for the last two years. and I have also replaced the middle exhaust section as well. The bike currently does not have an MOT as it has been in storage.  The front tyre will need to be replaced for the MOT. and possibly the rear. Whilst I have been as honest as I can be about what I know is wrong with the bike. as I said it has been stored for two years so therefore I would highly recommend you come and view the bike before you bid.
The Squire trailer was colour coded to the bike. and was also lacquered after the air brushing was added.  There is a very small mark on the back edge of the trailers lid. as can be seen in the photograph of the rear view.  It looks as though something has been rubbed against it.
The only reason I am now having to part with my Goldwing is because of continuing ill health. which has put an end to my motorbike riding days.
If you have any questions about the bike or would like to arrange to view. you can either email or call me direct on 07521-056972. Once the action has ended. we would require the winner to pay a non refundable deposit of £200 within 24 hours by PayPal or direct bank transfer.  The balance can then be paid on collection.  If required. delivery could be arranged.  Due to 'tyre kickers' this bike is 'sold as seen'.  We are having to relist this item due to being let down. so again I would recommend viewing before you bid.  Please also note that this bike is advertised elsewhere. 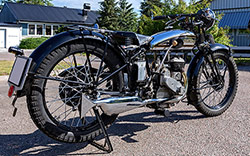