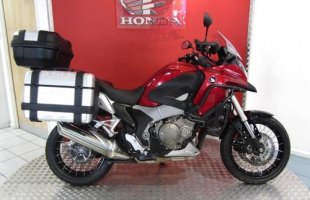 The new VFR1200-X. Honda Crosstourer has proved to be a very popular bike in the large capacity Adventure bike sector and is gaining an ever increasing fan base thanks to the combination of superb engine. great handling and Honda quality. The 1200cc engine is a V4 which delivers a unique blend of grunt and a sound all of its own. The final drive is by fuss free shaft and the bike comes fitted with all the latest Honda technology such as ABS brakes and traction control. For sale here we have a fantastic 'SE' example that has been fitted with all the extras you could ever need. These include a full compliment of Givi Trekker luggage boxes. the top-quality. Givi engine bars complete with spot lights and there is even a centre stand fitted too. Including knuckle guards as well. you stand to save yourself a small fortune against the cost of a new bike! And considering that it hasn't even got to the 500 mile mark yet. you're unlikely to be able to justify even considering a new one over it! You might be keen to know that we are rarely beaten on part-exchange values. so it must be worth finding out what we'd offer you on your current set of wheels against it isn't it? We literally take anything in regardless of Make. Model. Age. Condition or Value! Call us today on 020 8668 8856 or 8851. We are open 7-days a week throughout the year! There are just 482 miles on the clock. it has hardly been out of the garage! It is the SE specification. but with the Givi Trekker luggage trio in place of the Honda ones. Including a set of Givi Engine bars and Givi Spot lights too. With a genuine Honda. centre-stand to accompany the side. or prop-stand. This was NOT a demonstrator. it was a privately owned machine since new. Doble Motorcycles stock number 9323. 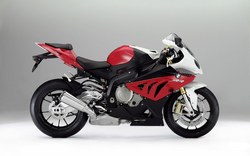