Exotic. ultra-rare and built with a level of attention few manufacturers can match. also fitted with carbon fibre Termignoni exhausts. The Bimota SB8R is hard and track-focused. It seems a shame to take something so carefully crafted and so beautiful then risk cart-wheeling it into a worthless pile of scrap. But if you don't thrash your Bimota round a track you're not using it properly. What's there is generally good enough for the Bimota SB8R to sit in an art gallery. Cost is rarely an issue – getting it right and making it look good are. For example the Bimota SB8R's tail unit has no frame to support it – it's all carbon giving a 2kg weight saving. Plus there's a bespoke aluminium frame made using high-tech techniques. The pegs are high. bars are low. Bimotas are well built but most SB8Rs are track or race motorcycles and few rack up tens of thousands of road miles so few problems are heard of. Quality is high. 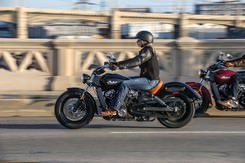