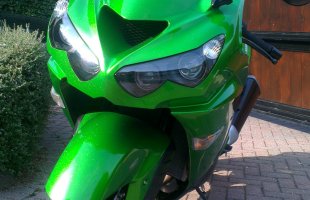 I've always wanted a big power bike but didn't fancy a super sports bike (although the S1000RR was extremely tempting).   The new ZZR1400 ticked all the boxes with its mind blowing performance with an ability to tour two up whilst still being more than capable on the twisties.   Every review of the new 2012 ZZR1400 raves on about the bike. not only its massive reserves of power and other worldly straight line performance but also its weight defying handing abilities and electronic trickery what with ABS. traction control. wheelie control and multiple power modes.

I bought it new in August 2012.   I ran it in properly. took it back for its first service then rode over to Germany and back.   The bike was then put away and it has sat there since under a cover and plugged into an Optimate.   I don't want to sell it but I've got a very busy summer lined up with little time for decent ride out on the ZZR.   Its an expensive lump of metal to have sat doing nothing so it needs to go.

The current model is exactly the same so save yourself thousands of pounds and the tedium of running the bike in and buy mine rather than new.   Let me take the (massive) hit on depreciation for a bike that's not even a year old.

The mileage might go up as Ive taxed the bike now the weathers turned and the temptation to go for a blast will no doubt rear its head on occasion.

The bike will be available for viewing in a closed warehouse.   No test rides will be given.   If you aren't happy with taking my word that's its mechanically 100% perfect and rides like a new bike then don't contact me as under no circumstances will you get to ride it up until the point where I've got payment safely tucked away.   The bike is not kept at the viewing address.

Im not interested in any part exchange. outright sale only.   Bike will be sold as standard.