Seller notes: A used dirtbike so the usual scuffs, scrapes and minor dings. No significant damage and all parts are original from new. Images were taken this week and the bike will remain as it is in the images. 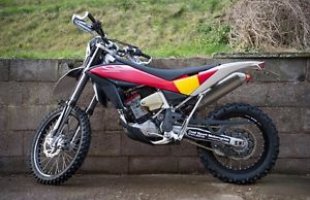 My 2010 Husqvarna on a 60 plate. White frame. black wheels as standard. I have owned this since Jun 2011. I bought it from the local Husqvarna dealer who had it as their demo bike. It had 85 miles on it when I got it and it now has 1126. It had it's first MOT in December which it passed no problem and it's done 32 miles since then. It also had a service at the same time. I have competed on it a few times and ridden it on the road a little. 15th in the Sportsman at the Welsh 2 day in 2012 to give you an idea of the level it's been ridden at. It's in good condition and has been serviced by the dealer regularly. It has nearly new chain and sprockets. Tyres are good for a few miles yet and it's fitted with Michelin mousses. Fitted with the more robust Acerbis wrap around hand guards. I have the manual. spare key and usb stick that came with it. I also have the standard exhaust which is brand new as the bike came with the Akrapovic pipe fitted and is mapped to suit. Overall it's a very tidy bike that's not done much. I'm selling it to fund my road racing but will not give it away for stupid money. To arrange to see the bike then drop me a message and we can arrange something. It will not be viewable at the address it's kept at as I don't want someone returning to take it with no intention of paying. I suggest that meeting at Dual Sports Motorcycles in Ledbury would be good as this is where I bought it from. Cash on collection is preferred as you will need to be happy with the bike before parting with your cash. If you have the ability to do an instant bank transfer then that works for me too. Final point. This is my wife's account so if you don't get a reply swiftly then it probably means she's unsure of what you are asking if it's regards to bike specifics. Thanks for looking. 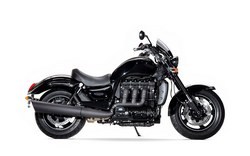