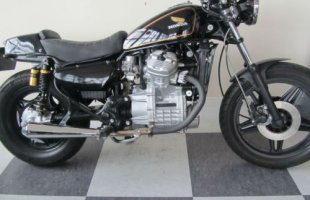 HONDA
STREET ROD/CAFE RACER
The CX500 does make a superb Street Rod. You either love them or hate them. but they turn heads. and create a focal point whenever you park up.
The bike presents a much slimmer. and cleaner profile to the original (excepting the all-important “V” of the cylinder heads). thanks to the modified side panels. one-off tail unit and the stylish seat. using the modified steel pan of the original. A slim front mudguard helps keep the forks in line. whilst the retention of the air box means that. unusually for a cafe/rod. it actually carburates cleanly. from idle to top end. A custom-fabricated battery box lives under the tail unit and a modified rear under tray keeps the electrics safe and dry.
The final combination of wide. flat drag-bars. comfortable seat and standard footrests results in an all-day-long riding position – letting you do lots more miles than many modified bikes. The overall aim with this machine was to develop a good. original design through high-quality restoration and some subtle. yet important. improvements and cleaning-up of lines. The bike looks almost as if it had rolled off the Honda production line at some point - and we think that's not a bad thing.
Don't miss your chance to own this attractive special. It will look cool outside the Ace Cafe - £4795. 00 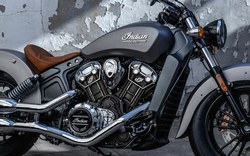