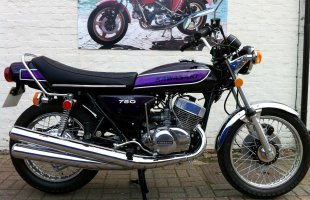 Sold new abroad. this 1975 H2C (Also known as the 'Widow maker') was first registered in the UK in June 2006 and totally restored the following year by John Edge. one of this country's leading Kawasaki triple specialists. Further work was carried out in 2007. We are advised that the engine has been rebuilt with a crankshaft labyrinth seal for long life. as well as new pistons and rings. and that the instruments were among many parts renewed during restoration. Only 55 miles have been covered since the rebuild's completion and is presented in immaculate condition.

This bike has been subjected to the most remarkable restoration we have seen. We believe that this is the best H2C in the UK today. Viewing essential and by appointment only. 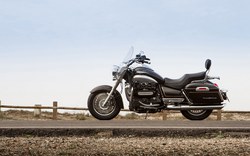