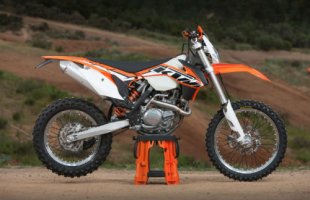 The 450 EXC is undisputedly one of the most powerful enduro machines in its class. The combination of light weight and high-capacity. high-tech. SOHC four-stroke technology is the right choice for all those in the E2 and E3 classes seeking maximum four-stroke performance combined with playful handling. These powerhouses are regarded without doubt as the benchmarks in their classes.
Spoiler. airbox cover and front fender. including headlight mask and headlight. have all been restyled for 2014. In doing so. we focussed on designing the new bodywork ergonomically and functionally in such a way that the whole motorcycle is in perfect harmony with the rider down to the very last detail. But other aspects have also been considered. For example. the designers ensured there is no ribbing whatsoever on the inside of the new front fender. thereby preventing mud build-up. Nevertheless. thanks to its skilfully selected contour and its modified attachment to the lower triple clamp. the new fender is up to 50% stiffer than its predecessor.
Developed for tough enduro conditions. the 449. 3cc SOHC engine is characterised by an extremely compact design. very easy maintenance and outstanding robustness. with weight kept to a minimum. Together with the Keihin fuel injection system. this results in unrivalled performance and rideability - specially designed for enduro use.
The cylinder head is equipped with an overhead camshaft. which has been reduced in weight by approx. 10% for MY 2014. as well as two titanium intake valves and two steel exhaust valves. The weight-optimised valve train (40% lighter valve springs and valve spring retainers) results in lower friction and therefore both improved performance and reduced engine braking. Designed in accordance with the latest racing standards. a reinforced cylinder head gasket now also guarantees even greater durability in extreme conditions. The auto-decompressor has also been reinforced to optimise its durability.
The lightweight. forged piston with a box-in-box design is equipped with the high-performance piston rings of the 450 SX‑F for MY 2014. The benefits are reduced oil consumption and optimised performance.
In MY 2014. the crankshaft with 63. 4 mm stroke and ultra-light connecting rod is manufactured by Pankl from a special. high quality steel. As on the other EXC-F models. it is equipped with a plain bearing in the lower conrod eye. The previous needle bearing is replaced with two press-fit bearing shells that run directly on the crankshaft's crank pin. This design enhances the durability of the engine. thereby enabling an extension to the service intervals for the crankshaft.
High-tech brakes from Brembo have always been standard equipment on KTM offroad bikes and. together with the lightweight wave brake discs. they are the measure of all things in terms of brake technology. A new handbrake armature has been employed for the 2014 model year. with new remote reservoir. smaller brake piston diameter and a new lever with optimised lever kinematics. As a result and thanks to optimised sintered brake pads (Toyo B169). the performance and application of the front brake have been perceptibly improved again.
We offer finance and welcome part exchange. Call today. 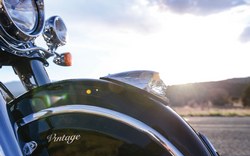