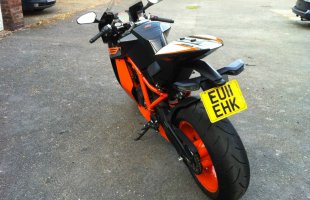 Hi. Up for sale here is the best bike by far I have ever owned. and Ive owned over 15 bikes. I have had the bike for almost 2 years and it has been absolutely faultless. It has not been messed about with. or any tacky add ons to make it look fast. Read the reports on these bikes. the new Panagale is only just better than it on the track. the RC8R beats it hands down in any other department.
The only add ons I have on it are an RC8 front mudguard (better protection for the radiator). a set of swingarm heel protectors to stop boots from rubbing. and lastly THE mod you do need for this bike. the full Akrapovic evo titanium race system and remap to suit. I have the baffle for this too. but have only used it when riding through Europe!!
The bike has the usual stone chips to the nose cone. but a new pair of white boards would cover this. one small mark on the right hand middle fairing panel(shown in pics). and a few chips on the back wheel from a clumsy tyre changer!!!Apart from that it looks mint.
The tyres are Dunlop D210 with almost full tread and I have just had the rear pads changed.
It has full KTM dealer service history and doesnt need doing again for around 5000 miles.
The logbook says that the bike is white as when I bought the bike I wanted a black one and there were none available. so I bought a complete fairing from the KTM dealer I bought the bike from. They will confirm this.
I do have the complete fairing in white which is still brand new. and if you prefer I can fit this instead.
The price of the bike with the exhaust is £8500 and this is non negotiable as my friend has offered me £1000 for this on its own for his RC8.
The price the bike is advertised at the top is with the standard exhaust only!!!!

The rear seat and rear footpegs are included in the sale as well.
I have all the documentation and folder that came with the bike when new.
Come and have a look. it is as clean as it looks in the picture.
Also best offer means offering an amount close to the buy it now price. crazy offers will be ignored. it is already the cheapest one for sale in the UK!!!!
I also have a set of wheels available in black if preferred that I can change for the orange ones.
Thanks for looking. the bike is located in Camberley in Surrey. GU15 postcode.