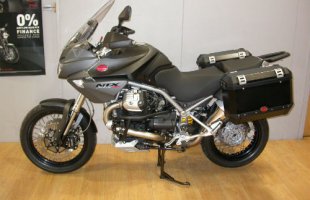 Named after the famous Alpine pass that connects Valtelline Valley to Vinschgau Valley with 84 amazing s-bends between them. Stelvio has launched Moto Guzzi back among the stars of the maxi enduro world. A highly appreciated bike that has now reached a coming of age at a technical-functional level. thanks to the updates and final tweaking undergone by the new 1200 8V and NTX.
It all starts with style. now even more attractive and trendy rounding off the fuel tank by integrating it within the lightweight fairing. which now highlights a clearly smooth streamlined effect which flows into the double front headlight assembly. The latter feature is a distinctive element of the Stelvio design. and the only detail inherited from the previous version. The top fairing. windshield and the half-fairing with integrated turn indicators are all brand new elements that combine to give the front-end of the Stelvio 8V a cutting-edge. more aggressive and dynamic look. It has an original design. but it is above all more functional and versatile. features that are of uppermost importance on models of this type. From an objective standpoint. the style of the new surfaces emphasises two fundamental project milestones compared to the previous version: more efficient aerodynamic protection. thanks to the new top fairing and practically twice fold range capacity thanks to the outstanding new fuel tank with a 32 litre record capacity.
This new Stelvio bike has an air of complete renovation about it. fine examples being the cockpit with brand new graphs on the on-board control panel. a new increased scale fuel indicator.
The heart that beats inside this touring bike is the renowned V-shaped 90° transverse twin-cylinder "Four valve" engine. the highest performer among all the families of engines manufactured at Mandello del Lario. which has now reached exclusive levels as far as its technical/performance development is concerned.
This latest version can boast the careful attention paid to achieve a more silent and smooth running of the engine. whilst tweaking the electronic control. timing system and cooling system. The brand new integrated ignition and injection ECU now exploits the signals sent by the two lambda probes to guarantee adequate feeding throughout the entire combustion cycle. improving response to the throttle control. low-to-mid-range power delivery further to consumptions and emissions. The ECU also includes the ATC system to prevent sliding: this system controls ignition advance and injection to cut torque delivery whenever a sudden loss of grip is detected so as to help the rider to remain in control under extreme. unexpected conditions. The system can be deactivated. just like ABS.
The engine now boasts a maximum torque of over 113 Nm delivered at a mere 5. 00 rpm and easily reaches a peak in output of over 105 HP; it practically reaches an automobile-level speed of 7. 50 rpm.
The NTX is the more “adventurous” version of the Stelvio. and now has all the technical features of the base version. plus some exceptional new fixtures. i. e. the sturdy "armour" that embraces it and comprises the oil sump guard. engine guard. cylinder guard. full cover hand-guards and extra large windshield with additional wind deflectors to protect the rider and his bike against the hidden dangers throughout his trip.
A bike dedicated to long haul travellers naturally needs luggage space. hence the spacious aluminium panniers and additional halogen lights. Even more luxury options are available on the accessory catalogue including a GPS navigator installation kit. heated hand-grips. CA. RC protection (Compact Reactive Cardan Shaft Drive). aluminium top box for the NTX or side wind deflectors. extra large windshield. dedicated body coloured plastic polymer panniers and top box kit for the 1200 8V version.
The new Stelvios are available in Guzzi Black. Moon White and Sienna colour schemes. while the NTX will flaunt a brand new colour concept on a black satin finish base (Lava Black).
http://uk. motoguzzi. it/#/motoguzzi/UK/en/moto/enduro/Stelvio/Stelvio-1200-4V-NTX/motoDescription 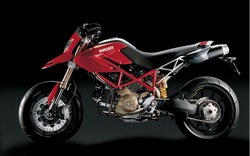