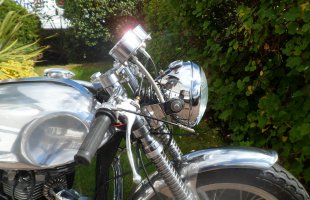 Re-Advertised due to timewaster

And how Triumph Engines work

Original Norton featherbed (wideline) frame. the bike was originally a 500cc Norton . and then converted to a 650cc Triton in 1986 . now the T110 engine rebuilt

It comes with the original period Number Plate with the genuine period buff log book. first  registered in 1960

I purchased the bike in 2011 from  a Mr Neil Sutherland when I saw it advertised on the Car and Classic website. I was told that the bike had done no more than 256 miles and purely required recommissioning and a set of new tyres to get it on the road. I was overseas at the time and bought it as seen in this advert :

http://www. carandclassic. co. uk/car/C268417  Unfortunately I ended up in a bidding war and it cost me a small fortune to buy because it looked so good and had some credibility and provenance (see below). but I have had to spend another small fortune to put it right.

I was given the Classic bike article that featured this bike as part of a pair in 1986. It looked great then as can be seen in the magazine article which I can send. unfortunately Mr Sutherland a so called bike collector and I use that term very loosely. the owner of a now defunct website showing his collection “specialmotorcycles. co. uk “. was not entirely truthful. and in fact the bike may have looked the part and was stuffed with rags to block of all orifices for protection but merely a ploy as turned out to be a pile of cr*p and needed a rebuild to get it into this condition (lots of pics of rebuild)

A classic bike without all the modern brake discs and suspension mods from a jap bike.

The engine was built by two engineers who advertise in Classic bike and are pretty well known. I then took the bike to Steve Blackwell . founder and Chairman of The Triton Owners Club (where I am also a member) Steve worked on it for a many months to put it back together modifying it. and upgrading everything as well as rewiring it and giving it the look it has now. which is pure classic Triton if you can call it that. as we all know they are a labour of love and are all different and personal.

The bike has been given an expensive engine overhaul new big ends and mains etc etc to compliment the new Morgo 750 Conversion. brand new Boyer electronic ignition system for easy first kick starting and an uprated Dynamo to give 12v lighting.

Also includes a few items below:

Primary chain  and Set of casing screws and Gasket set

Regulator box to enable the switch over to 12v electrics

The award is mine and the bikes for the year and will go back to the Triton Owners Club for next year's awards.

Overseas buyers - payment must be cleared before the bike moves anywhere.

Delivery can be arranged at cost to buyer

Deposit of £250 (non refundable if you suddenly change your mind)

Do not ask what reserve is its an auction

Bike is advertised elsewhere so may be sold outside of auction 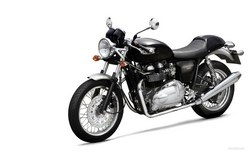