For those that do not know the different variants of vdue . there are 5.

1. nbsp; Original Injection approx 140 built - some converted to carbs. some reworked with engine mods and new ecu map . some still in original state.

This is the ultimate Bimota Vdue variant . It is the final edition which takes all the experience gained from the previous carb'ed model road and race bikes and combines it into the final build of 30 bikes.

These EF bikes were built as carb only bikes . they are not modified injection engines. but the result of years of modifications and knowledge gained from the Trofeo race series.

The EF bikes also have the extra carbon race airboxes and carbon belly pan to accommodate the extra size of the airboxes . and best of all have specially made Jolly Moto exhausts and a special engine map to suit the underseat race pipes. The exhaust alone are worth €2000 and it is not a simple swap onto a normal vdue ( if there is such a thing as a normal vdue- they are all special !!).

The pipes and the engine map provide the best spread of the 135bhp power and combine this to the dimensions and weight of an RGV250 and this will give you a 2-stroke that you did not believe possible.

The vdues Chassis is covered in big name parts. Ohlins shock . Brembo brakes . Paioli carbon wrap forks to name but a few . and the whole bike comes in at 145kg dry.

This particular bike is in the process of being UK registered . it has a UK clocks and lights etc and has a grand total of 5 miles on the clock.

Any more info or pictures please send me a mail and I will get back to you. 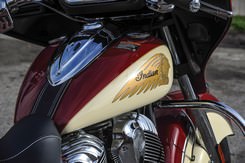