Seller notes: Unmarked just back from the Triumph Factory with all the 2013 up grades fitted including new exhaust. 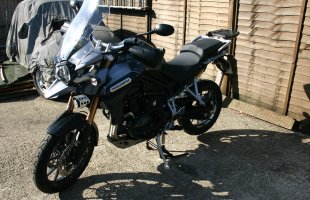 Welcome to my ad for my Triumph Explorer 1200
It for for sale due to my wife preferring our Tiger 1050 SE so it just never gets used. It is the launch model so comes with. crash bars. heated grips. spot lights. tyre pressure checking software (TPS) and a Triumph alarm. I have also fitted a Triumph sat nav bracket and front fender extender. carbon rear hugger and comfort seat. It also come's with colour matched Givi Luggage. that includes E460 top box and E360 panniers. as the 1050 Tiger SE has Triumph luggage but it holds a lot less than the Givi boxes. Invoice was for £12. 00 may last year. plus about £800 of extras I have fittedBasically I ran it in for a trip to Austria in June 2012 to the Tri-days week hence the low mileage as not been use much since. only 3450 miles on the clock. Always garaged and unused in winter stored covered in WD40 until May
It has just returned from the Triumph Factory where it had all the 2013 updates fitted ( always check to see if the Explorer you are buying has been back to the factory for this work)So it will come with the extended engine warranty extra 12 months on top of standard 2 year warranty.  So now fitted with a brand new factory fitted new shinny exhaust instead of the impossible to clean matt silver one. new main stand and upgraded engine internals. The bike also comes with a Fuel aftermarket can and original Triumph link pipe which sounds fantastic. ( not fitted)Just serviced by Carl Rosners when it came back from the factory. now sounds very sweet indeedPlease come and see the bike you will not be disappointed.
Sorry no part exchange as a private sale
Collect only.
No overseas bidders or scammers need contact me.
£250 to be paid via paypal within 12 hours of buying the bike balance on collection.
More photo's to follow soon. Bike is in Tonbridge Kent 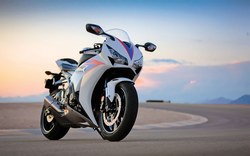