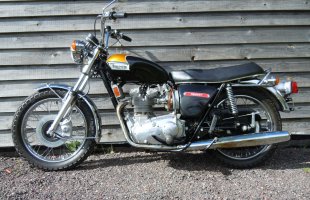 www. a28classics. co. uk
By 1974 the Triumph Trident ​T150V had received all the modifications and changes to make it a sought after model.  The original brake had been upgraded to a disc and the gearbox to five speed.  Roy Bacon in his essential reference work 'Triumph Motorcycle Buyer's Guide' gives the T150V five stars and recommends both to ride and as an investment.  And that was in 1989!  The bike for sale here is a recently imported US model T150V with the US style tank and higher bars.  The bike has been MOTd. registered and taxed in the UK and is ready to ride.  According to the previous owner. the mileage shown on the speedometer. 1950 miles. is correct. making this bike possibly the lowest mileage T150V anywhere!  It has been maintained in superb original condition with faultless chrome. and original paint with a lovely patina.  Even the frame has the remains of the original 'Made in England' emblem.  The condition of the bike means that there is no need for restoration. it can simply be maintained. ridden and enjoyed.
Contact Andrew on 07712 410442. 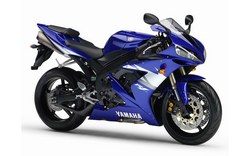