For sale by auction on Saturday 07 June 2014 with Historics at Brooklands. Brooklands Motor Racing Circuit. Weybridge. Surrey. Call 01753 639170
Paul Dunstall retired from racing having been more than
competitive on his Dommie 99. indeed having won his first ever home
race at Brands Hatch facing Manx Norton's with far more of a race
pedigree. After his race career. Dunstall started to concentrate on
tuning and fabrication work and. in 1961. Dunstall became an
authorised Norton agent. In 1962. Dunstall purchased the Domiracer
stock making complete bikes as well as aftermarket parts. Models
given the full Dunstall treatment included Dominator Model 88. 99. br/>77 and 650SS. Very soon competitors of the Dunstall Dommies
complained about them having an unfair advantage so. in 1967. br/>Dunstall became an authorised manufacturer. homologated by the
Auto-Cycle Union for entry into the Isle of Man TT. In 1967
Dunstall motorcycles notched the world one hour record at Monza
averaging 126. 7mph for the 60 minutes with high speed records of
over 140mph.
Not only is this machine immaculately restored. beautiful to
look at and stunningly proportioned but there is a small detail
that makes this motorcycle truly unique. If you look through the
accompanying green log book. you will notice that it was first
registered to Eltham Motorcycles &amp; Scooters. This happens to be
the earliest known trading address for Paul Dunstall. There is also
one other letter that accompanies the paperwork and that is from
John Woodgate who runs the Dunstall register confirming that. to
his knowledge. this is still the earliest Dunstall on record. Also
included is a road-test report of the Dunstall Dominator reprinted
from 'Motor Cycle' dated 20th May 1965 presented with the
complements of Paul Dunstall Motor Cycles and. again. giving the
address in Feltham. Of all Dunstalls. this must be the finest
available. 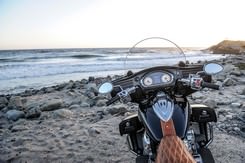