Seller notes: Excellent condition, kept in the house and unused during winter. New rear tyre 500 miles ago. Always cleaned and F365'ed after each ride, less than 1yr old, less than 5000miles. 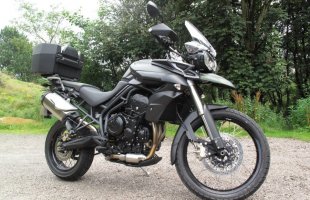 This is an advertisement for my Triumph Tiger 800 XC ABS in Matt Khaki Green 2012.
Its always been kept indoors. actually in the lounge until end of April then moved into the garage.  The bike was unused over winter so has never seen a salty road. As its the same colour as a Christmas tree it got decorated as you can see from the photos. no lights allowed though as I didn't want to risk scratches.
I bought it from A1Moto in York on 21st July 2012 and it subsequently had its first service at A1. The bike will be covered by the Triumph warranty up to 20/7/2014
Extras:
Triumph top box and mounting kit. (good for a weeks tour round Scotland for 1 person)Triumph top box back rest (for pillion)Triumph large adjustable touring screen (plus original)Triumph extender for front mudguard (keeps engine cleaner)Triumph tank protector (not actually fitted. up to you if you want to fit it)Scottoiler chain oiler (with twin injector to oil both sides of chain)
Its done just under 5000 miles. will come with 12 months Road Tax and had a new rear tyre just 500 miles ago. Note the touring screen isn't shown in the pictures. I'll be uploading some more when it stops raining and I can bring it out for a photoshoot.
I would say 75% of the miles on this bike has been ridden two up and has been used for touring. the other half really likes the topbox and backrest as it makes for comfortable touring. There was never any finance taken on the bike so will be HPI clear. however if you need the reg number to check yourself just let me know.
Any questions please send me a message. 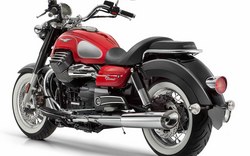