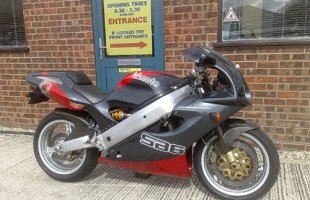 I think one of the best Bimota's. SXR1100 engine with 156bhp. n a very light. hort superb quality Aircraft grade alloy frame. t is a 1 owner bike and in nice condition. t was used by the owner and not stored under covers in a garage. e purcased it new to use daily . nd thats what he did. t has done it no harm. nd i think it is a better bike for this. ome of them are mothballed from new and suffer all sorts of problems from being unused. his model has got Bimota's "straight line connectivity"design frame. he swinging arm pivits from the frame and then the frame runs up in a straight line to the headstock. o putting all power in a straight line from swinging arm to headstock. rilliant. lso see how the rear shocker is offset from the centre line to keep the wheelbase short. nd it is still "very" short even compaired with current sports bikes. here is no subframe at the back the rear seat housing being supported by the very strong carbon fiber seat unit. t is self supporting. lthough in reality it sits on top of the underseat exhaust and is partly supported by this. he exhaust really is a proper under seat job with pea shooter end pipes. hese bikes where around £23000 new. ut possibly never sold for that. think the previous owner paid around £16000 for it new in 1999 discounted in a bike shop after it had been in ther a while. hey are superb quality. enjoy owning them just to admire the Quality of the solid billit alloy machining/frame work etc. his bike can still give most modern superbikes a scare. nd they where first made in 1995. ay ahead of there time. think when they came out they where the quickest bikes in the world that you could buy from a showroom. hey top out at around 180mph. nd handle and brake with the best of the currant bikes. super investment and a pleasure to own/ride £7995****** "SEE"**** PRACTICAL SPORTSBIKES MAGAZINE Jan 2013 . issue 27. or feature/road test of this bike 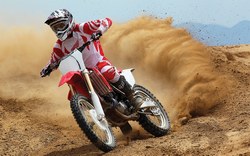