For sale is my much loved Triumph Thunderbird 1600 abs model. Havent had it long but reluctantly im having to let it go to raise some funds. I spent months looking for the right one and this one is truly mint. not a mark blemish or spot of dirt anywhere. I fitted the genuine Triumph " Tor" short exhausts at a cost of £320 plus the engine re map and high flow K&N filter. makes the bike sound much better than the standard long exhausts and give a bit of extra power. Also included is a genuine Triumph quick release sissy bar with back rest. never been used. I just fitted it to the bike for the photos. also storm handlebars and risersChrome side panels and the standard onesFull service history. just had its annual service a few weeks ago. I have the V5 log book in my name also the spare keys and service book and hand bookThe bikes fitted with a data tool alarmAny inspection is welcome ( you wont  find a thing wrong with it ) any questions just askNo test rides or tyre kickers please. i dont want any part ex or daft offers ( im not desperate to sell it )Cash only on collection 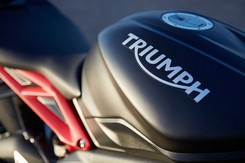