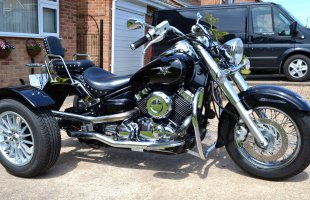 Here for sale is my Dragstar 650 Trike.  It was built by a very experienced vehicle engineer who has built over 60 of these over the years. It has a 'Bolt-on' rear axle. which has been shortened by qualified engineers.  New wheels and tyres at the rear.
The trike drives really well and sounds great with the Highway Hawk Slash Cut exhausts. It is a Soft Tail. using the original monoshock. New led lights at the back.  At the front of the rear mudguards I have fitted white led's as marker lights. ( see last image ).
When I have been out on this trike I have had loads of nice comments and people wanting to take pictures of it.  Even the bloke at the DVLA said it was one of best he'd seen.
Ready to ride away.
This is a Classified ad not an auction. I am open to offers as I have been offered another bike for my next project.
The mileage is about 14500. But might go up if the sun starts to shine.
Please contact me if you need any further info.
Thanks for looking.