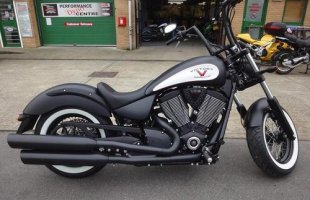 Brand new 2013 Victory High Ball in suede black with graphics and a V-Twin 1731cc engine.
Few bikes get unveiled to such an overwhelming response. Riders flocked to this bobber-spirited. high-performance cruiser with as much anticipation for twisting the throttle as they did for its killer looks.
106 CUBIC-INCH FREEDOM&reg; V-TWIN
Whether you're finding your way across town or cruising the city's glass canyons. the Freedom&reg; V-Twin power plant delivers 113 ft lbs of green-light torque with ultimate authority. The heart of every Victory Cruiser machine. it informs the world of your arrival with every crack of the throttle.
6-SPEED OVERDRIVE TRANSMISSION
The best performing transmission on the street collects the power generated by the massive V-twin and allows the Vegas High-Ball to roll fluidly between the curbs. Helical-cut gears ensure that each shift will be as smooth and clean as the bike itself.
113 FT LBS TORQUE
Press the starter and you can feel deep in your chest an eruption of low-end torque. With each precision-tuned piston stroke. the Freedom&reg; V-Twin's 4-valve overhead cams and perfectly matched 6-speed overdrive transmission promise to provide unmatched throttle response. acceleration and passing power.
APE-HANGER HANDLEBARS
Make a statement with two fists in the air. These blacked-out apes are what give the High-Ball its signature profile. Feel a little less simian? Pull `em down low for a more relaxed. but no less intimidating riding position.
16-INCH LACED WHEELS
Old-school lace design with white sidewalls. A pure throwback to a classic style that set the stage and informed the world what riding was all about. It still does. Throw a leg over the Victory High-Ball. Wherever you want to go from here. these wheels will take you.
SHORT FRONT FENDER
Less is indeed more. This shorty front fender offers protection from whatever the road throws your way. yet keeps things simple and essential - true to spirit of the bobber style.
If you would like to view this bike come on down to the showroom or if you would like to get more information on it then give us a ring. We have 2 Victory motorcycles available for test drive.
Moore Speed Racing are now an official Victory Dealership and Service Centre in the south coast!
Warranty Included. 0% Finance. &pound;99 UK Delivery 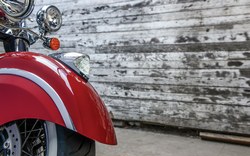