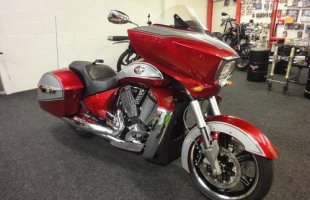 Brand new 2012 Victory Cross Country in sunset red and titanium gray graphics with a V-Twin 1731cc engine.
The bike has a 6 speed manual overdrive gearbox. It has a dual disk brake setup with ABS for excellent braking. cruise control. signature fairing. sleek styling. extra long floorboards for added comfort. hard bag storage to carry all you need.
Want to stack this bold bagger up against every other bike in its category? Do it. For all out-riders. few bikes feel as comfortable in the seat as this one. It's a riders favorite among the Victory lineup. with riders customizing this bike to reflect their own attitude and style. Unique looks. Smoothly refined power. Hang on and enjoy the ride.
If you would like to view this bike come on down to the showroom or if you would like to get more information on it then give us a ring. We have 2 Victory motorcycles available for test drive.
Moore Speed Racing are now an official Victory Dealership and Service Centre in the south coast!
Warranty Included. 0% Finance. &pound;99 UK Delivery 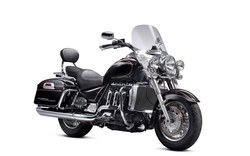