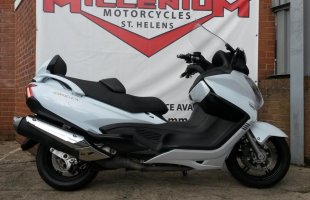 Suzuki AN650 Burgman ZL4
Save &#163;1100 off list price
The Burgman 650 Executive is one of the most luxurious methods of two-wheeled transport that money can buy whilst using 15% less fuel* than the previous model. With its light handling. ample cornering clearance and decent power. the Burgman combines advanced motorcycle design all within the executive comfort of a scooter. With high levels of specification such as heated seats and grips. cavernous amounts of storage. and a protective front screen which can be raised or lowered electrically while on the move. the Burgman takes executive scooter refinement to a whole new level - there&apos; even a power socket for your sat nav or to charge your phone on the move. With unsurpassed levels of comfort. weather protection with big bike power and ABS braking. the Burgman is a leisurely tourer and hasty commuter right at the top of the luxury scooter class.

Choose your next motorcycle from the largest dealer in the northwest. On site facilities include 2 floors of over 500 new and used Bikes &amp; Scooters. with a team of sales specialists to advise and answer all your needs. We also offer competitive finance packages. A comprehensive clothing and accessories outlet. dedicated parts department. a service centre that can maintain all makes and models with technicians with over twenty years experience. We are main dealers for Yamaha. Suzuki. Kawasaki. MV Agusta. Benelli. Royal Enfield. Sym. Daelim and Keeway. Nationwide delivery available. Also find us on Facebook and Twitter @mmcbikes1 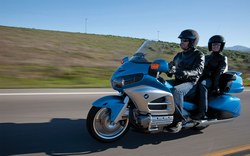