This top of the range Victory Cross country Tour has just come into stock and is fully equiped with heated seats. heated grips. ABS brakes. stage one exhaust system. detachable top box.
VICTORY COMFORT CONTROL SYSTEM
Since Mother Nature seldom listens to the weather requests of motorcycle enthusiasts. we've taken means to accommodate her. Down below the knees. we've given the Cross Country Tour dual fairing vents (as well as a storage box). Close ‘em for complete protection in cold or rain. open ‘em wide when the weather's more agreeable.
CRUISE CONTROL
After making every other aspect of going the distance as effortless as possible. the throttle hand still had a beef about being overworked. By adding precise. automotive-style cruise control. the right mitt can now simply hang on and enjoy the ride
SADDLEBAG AND RAILS
With lockable latches and 21. 3-gallon capacity. the Cross Country Tour can protect from theft and accomodate a passenger that doesn't follow the "travel lightly" rule. Exquisitely designed chrome rails provide style as well as tip-over insurance that you'll be grateful for when your brother-in-law asks to ride.
ADJUSTABLE PASSENGER FLOORBOARDS
When the passenger floorboards are easily adjustable. any height passenger can find comfort. That's the long and short of it.
Instock now. part echange taken on cars or bikes. finance available STS.
Victory have been making machines for over 14 years and strongly heading towards being the market leaders in cruiser's. The quality. finish and ride make these bikes truly awesome not only to ride but to look at aswell. We have been selling Victory machines for over 10 years and pride ourselves on customer care and satisfaction. We currently have over twenty new bikes in stock from Vegas 8-ball through to Vision and a few used machines. Offering spares. servicing. mot's and tuning. This Hammer S is live and in stock now. we can also offer low rate finance (STS). for more details then call March 01354 660366 or for afterhours call Mark 07909983455 or Richard 07860361920 Manufacturer Victory Model Mill 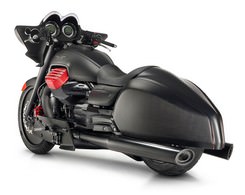