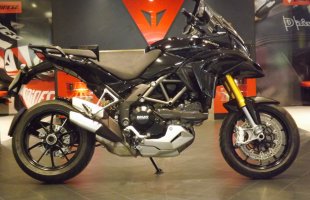 This machine is also on sale in our showroom at this price and could be sold and removed at any time.

What you're looking at is one of the best motorcycles I've ever ridden and I've been trading for 30 years. Unfortunately. its a Ducati and Streetbike are happy Yamaha and Suzuki Dealers.  It started raising a few eyebrows when I kept turning up at dealer meetings on it! The story is.

I went to a Trade Only Closed auction in March 2012 specifically to buy this bike. Not the best way to haggle. This Strada is an official Ducati UK Machine and is warranteed by them until March 2014. It appeared in the trade auction I went to when George Whites went down.  It was one of theirs. There were 2 bikes in the auction. I had this one and my mate (another dealer. who doesn't sell Ducati !) had the other one. Both brand fire new at point of purchase.

The bike was registered in March 2012 and used. by me. immediately. First service and all mods have been completed by SMC in Sheffield.  I managed to get an owners manual and service book from Ducati. It also has the lock sets that can be fitted to panniers if the new owner wants to get some.  Means that you only have one key for everything.

The bike is full spec 1200 sport; Electronic Ohlins suspension - Switchable Traction control - Abs brakes - Multiple Power mode selector (sport - touring - town etc) - Proximity key ignition - Carbon everywhere (fairing scoops and engine covers).  It is in 3000 mile condition - mint. (It's actually only done 2800 but I might want another ride before it goes).  The only flaw. which it's had from new. is a small razor blade "nick" in the rear seat. Dunno how that happened but it's always been there.

To ride - quite simply it's awesome. Even when I bought it I didn't expect it to be quite as good as it is. It's impressed all my techs immensely. not easily done. The motor is incredible. The suspension simply some of the best. And its comfortable. Thge perfect customer for this bike is somebody like me - A guy who's been riding sports bikes all his life and can't compromise on performance and handling but doesnt want to be riding around with his heels in his butt cheeks any longer. The Strada does it.  It is just simply awesome. Best thing you could do before buying is ask somewbody else who's got one. I tell ya. I haven't spoken to an owner yet who isn't over the moon with their bike. Most wouldn't swap back to anything else now. and I can understand why.

Please don't tell Yamaha and Suzuki. I love those guys. but. If I had to call it a day today and walk out of Streetbike with just one bike. this would be the one I'd take. Yup. that good.

We would require a £200 deposit by Pay Pal to hold the bike for 7 days but not the whole amount. The fees would be a killer!! We can arrange finance for the balance if required. We also accept debit cards (No charge). We can also accept payment by all major credit credit cards (2% fee applies)

We will consider part exchange subject to appraisal and valuation. 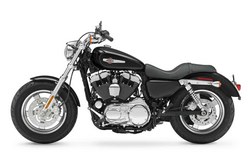