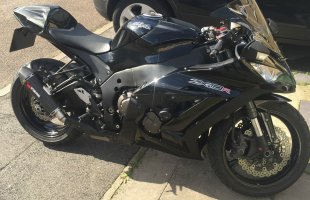 Kawasaki ZX-10R Special Edition - Late 2013 registration with traction control. 9300 miles.
This bike is one of two special edition bikes made in 2013 at Bournemouth Kawasaki. The standard fairings. wheel rims. headlights. exhaust. windscreen and rear seat cover have all been replaced with carbon fiber style counterparts to create an absolutely stunning bike. The exhaust is manufactured by Scorpion.
The bike has 2 keys. V5. full service history (all services carried out at official dealer). manual. certificate of authenticity and security key (to get more keys made if you lose them)
Additionally. I will also include the unused. brand new factory standard exhaust.
Performance wise. its unbelievable to ride. It has 3 power settings and 3 traction control settings (low. medium and high) which mean you can have the bike tailored to whatever kind of ride you are going for. With traction control on full its almost impossible to wheelie or for the back wheel to slip so its great for a ride around town in the wet for example. The balance of the bike is extraordinary and you always feel in full control. it really is a pleasure to ride.
There are a few signs of the usual wear and tear but its always been kept undercover and has been looked after well. It fell over once in a parking position and the only signs are a couple of scratches on the exhaust and crash protectors
I am only selling as I am trying to save for a house deposit and I cannot justify owning something of this value at this particular point in my life. A bike of this power is also wasted on me as I'm a bit of a cowardly rider and have never pushed it anywhere near its limits. I'm gutted to see it go and someone out there is getting an incredible bike. 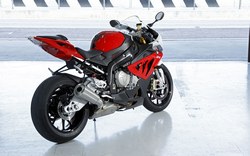