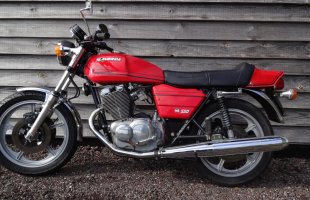 These lightweight 500cc bikes were launched in some markets. including the UK as Alpinos. We have just found an excellent example in the Netherlands. originally registered in 1980 on frame and engine number 2909.
These bikes were very well received at the time by the motorcycle press. but never sold in large numbers. with approximately 2750 having been produced. They are light. particularly when compared with other Laverdas. with a dry weight of 175 kg. They benefit from Japanese and German electrics. making them reliable. and they ride beautifully with plenty of power for a classic 500cc bike. Transmission is provided by a very flexible 6 speed gearbox. They were a favourite of Slater Brothers with Roger Slater quoted as saying ‘always a favourite of mine. built like a Swiss watch. light and nimble. '
Our bike is in very good original-looking condition. The bike was dry-stored in the Netherlands in a Laverda collection. We have recommisssioned it. MOTed it. and registered it on an age-related plate. The following work has been carried out:
• Restore original rear Marzocchi shocks
• Clean and service carburettors
• Change liquids as necessary
• Replace final drive chain
• Overhaul electrics
• Replace rear brake pads
• Replace gaskets as necessary
This is a high-quality machine. which is great fun to ride. Given their relatively rarity these models should also prove to be a good investment for the future.
As featured in Classic Bike Magazine October 2015. 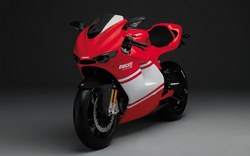