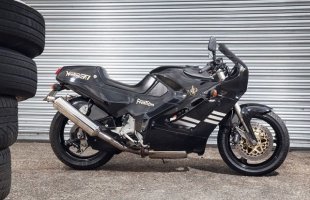 Norton F1. serious parties are strongly advised to contact me on 07787 172617 to discuss further prior to bidding.   This is an original bike which wont be found anywhere else in this outstanding and original condition. except in a museum.   The bike is one of two currently owned by myself.   The bike was in a private collection and was last ridden on the road in 1993.   It was purchased by me and re-commissioned in sept-oct 2015.   It was also MOT'D so is ready to be taxed and ridden.   It has low mileage and even has the original rubber on its tyres.   Purchased as a long term investment. a change in personal circumstance means I have to part with one of these beautiful machines.

PLEASE NOTE: I RESERVE THE RIGHT TO END THE AUCTION EARLY AS THE BIKE IS ADVERTISED ELSEWHERE.

The F1 was a road-going sports model that Norton based on its RCW588 racing motorcycle. The F1 was offered in only one livery: black. with gold decals and grey and gold stripes. to reflect John Player's sponsorship of Norton's race team. It was distinctive as it used a 588cc liquid-cooled twin-rotor Wankel engine. developed from the motor in the Norton Commander.

Brian Crighton. the brains behind the Norton rotary racers was no stranger to racing himself and in 1986. Brian's engineering talents came to the attention of the Norton factory in Lichfield.  He joined. and was swiftly promoted to Research and Development. where he was involved in theprogression of the Norton rotary engine.   Brian quickly became convinced that the rotary engined bike would make a great base for a race bike. but was turned down by a very sceptical hierarchy.  Unperturbed Brian went about the project in his spare time. in the caretaker's shed at the Norton factory. roving his vision a success and changingthe minds of the management in 1987. when a mildly tuned version achieved a speed of170mph at a MIRA test ground!

Scoring a race win at its second ever meeting and the factory decided that a proper race development programme should take place. Steve Spray made his debut on the rotary racer and following victory at the first two races. led to the team gaining sponsorship from JPS. In 1989. Spray won the 750ccSupercup Championship and the British F1 title. alongside setting numerous lap records.   Also in 1989. Brian Crighton was made Senior Development Engineer with Barry Symmons. ex-Honda Britain boss. brought in to run the works team.  With Symmons came chassis guru. Ron Williams. as well as 2nd and 3rd place finishes for Trevor Nation and Robert Dunlop at the Isle of Man. with Nation also winning the MCN TT Superbike Championship.  Not long after. however. in September 1990. Crighton resigned from his position at Norton and blamed his depart on Symmons. with one of the main problems for the unhappy splitbeing that Symmons had switched the team to Michelin rubber. meaning all last year's work was out of the window.

The road going derivative of the race bike was made in very limited numbers. 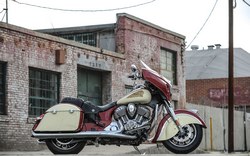