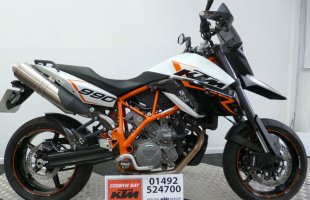 Full dealer service history. 2 previous owners. oxford heated grips and fly screen. Extremely clean and rare bike. if required we also have a pair of carbon tipped Akrapovic slip on silencers rrp £1394 for £750. The KTM 990 Supermoto R is an absolutely stonking bike. On the road the bike is hysterical - a complete hooligan bike. Get on it. point it towards some tight. twisty roads and try not to giggle with excitement. This is the Supermoto R's strong point. It turns twisty roads into a private race track. Radial Brembo brakes are simply excellent. The 999cc V-twin makes 114bhp and is a great engine with buckets of grunt. which make firing between corners great fun. The throttle response is instant and simply brilliant. Once you get the motor spinning it'll be hard to wipe the huge grin off your face. Quality components means a high overall standard. New or used the KTM 990 Supermoto R represents good value for money. KTM's brand represents high quality and the market reflects that with slow-to-sink residuals. As a flexible. feel-good option there's little to touch it. especially if you're tired of cramped sportsbikes. You get Bosch ABS. which is a brilliant system. giving you more conifdence on the brakes but not being too intrusive to stop you having fun. And it can be turned off. Brembo brakes. Marchesini wheels and WP suspension are all top notch products and you can feel it. 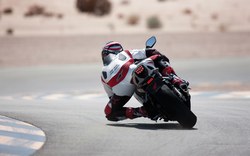