KTM 1190 Adventure R 2015 model and year
2700 dry miles. I bought this bike to commute to work but ended up using the car (British weather). my bike has never been thrashed. crashed. dropped or abused. It has its first service and the next service is due in 7500 miles time.
It is unmarked.
The only extras I specified were the KTM alarm system and the KTM back box. hese were an additional £800. this bike doesn't need anything else. the tool pack and folder is all present and untouched. the bike is also Data-tagged and c omes with two keys.
The KTM 1190 Adventure R is truely remarkable to ride. it feels so much smaller than a 1200cc. 150 BHP enduro bike. check out the reviews!
It has been garaged since new.
The bike can be ridden and seen at most times. the bike will not be ridden without full payment in my hands or bank beforehand. obviously refundable if the perspective owner does not like the bike.
The bike is not a distressed sale and I do not have another bike on order. it is simply not used enough. 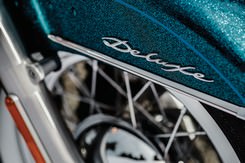