Seller notes: This bike was built in 2009 and won two shows that year. It has been ridden since and has one or two touched in chips on the frame. Although registered as the original 1976 bike it was built in 2009 using a 1991 1200 evolution alloy head Sportster engine. 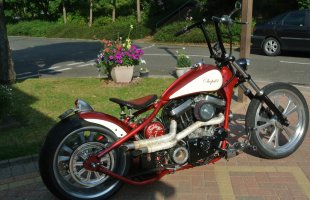 I bought this bike in April 2012 as an ex show bike built by "Sickboyz Customs" that in 2009 won "Best Harley" at the "Chop and Rod" and best Sportster at the "South Of England" rally at Bisley. You can see the bike on the "Sickboyz" web site. I might consider a part exchange (subject to rules) to the value of £3000. 00.

Built from the ground up the only remaining parts of the original Sportster were the engine and headstock. Wade at "Sickboyz" created the frame. rear fender. and gas and oil tanks and "Stig" painted the bike in Lucifer Red Metallic and Cream doing a beautiful job. Wheels are 18" diameter but of unknown manufacturer and the rear runs a 240/40/VR18 Metzeler. The size of the tyre provides extra comfort together with the pre-load adjustable springs beneath the hand tooled leather seat with "Chopster" stitched into it. Should you take it out in the rain there is a tailor made waterproof cover for the seat.   The handlebars are "Z Bars" and are internally wired and fitted with "Performance Machine" levers. master cylinder and switches. The front brake is stock but the rear is billet aluminium of unknown make and the bike stops really well. Chrome and rubber forward controls complete the riding position. A one off high level straight through stainless steel exhaust gets the gases out and sounds amazing.

When I got the bike home I discovered that it was unwilling to tick over without choke and ran badly on the pilot jet of the stock carb. I took it straight up to Sycamore Harley where ex-Stadium Master Tech Rich Auton discovered that no Dynojet kit had been fitted. With that done and a full service and safety check carried out and my pocket over £600 lighter I started to ride it. Shortly after the poor running returned due to a blocked jet and the engine developed an oil leak. I carried on riding until the end of Summer 2012 and laid the bike up. During the Winter I decided that as I loved the bike so much I needed to get it sorted out once and for all. A call to my old work colleague Steve Hazell of Maulden Motorcycle Company and the bike was booked in to sort the oil leak and to fit a Mikuni HSR42 that I had bought. Steve has worked for Magic Group. JR Tagger Harley and Silverstone Harley and now runs his own Harley & Buell service and repair shop in mid Bedfordshire and races in the UK Flat Track series. A week or two later I got a call from Steve to say that a top end overhaul was required and I gave him the go ahead; a few days later another call to say that the pistons were scored so a rebore was done and new pistons were fitted together with the Mikuni carb and a new Digital Instruments speedometer. another £800 spent!

The bike rides like a dream now with very strong performance (although running in) and instantaneous pick up from any revs. It is very light for a Harley and stops and handles in a way that no other Chop that I have owned or ridden does; even Harley Techs and MOT testers that dislike Chops comment on how well it rides. goes and stops.

When I got the bike it showed 52 miles on a non functioning speedo. the new one shows 137 miles and a previous MOT from 2010 shows 8612 miles on the original speedo.

Cash on collection. Foreign buyers welcome but I must have the money by CHAPS bank transfer in my account before I release the bike. I used to be in the Harley dealer network so I have shipping contacts for Europe or you may arrange your own. I do not have facilities for crating the bike. a European delivery would be by van. Viewing welcome by arrangement. 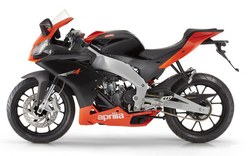