HIGHLIGHTS:
- Formerly part of the Charles Williams Estate
- Twin Cylinder 998cc power plant
- Engine #V1016 (January 1938)
- Frame #DV1755 1939
- VOC Certificate
- Running and Pristine example of one of the world rarest motorcycles
- Spectacular correct restoration completed by a renowned Vincent expert
- This Vincent HRD Series A Twin Rapide is one of approximately 78 produced, 60 in existence
- Many call this machine "the grand-daddy of Vincents" Rarer than Brough Superior
- Vincent Series A Twin rarely become available - don't miss out!
- A wonderful addition to any collection or museum as one of the most rare and pristine motorcycles
A video link of the bike running can be seen here: https://drive.google.com/open?id=1YBPm44gVZ4c2-qTTGTynC-QqVCUxhaMA

If you have further questions or inquiries, please contact Bill Melvin 616-450-0691.


This is a pristine and running example of one of the world rarest motorcycles with a spectacular correct restoration completed by a renowned Vincent expert. This Vincent HRD Series A Rapide Twin is one of approx. 78 that were produced with approx 60 still in existence, it is called "the grand daddy of them all" and "rarer than a Brough Superior" by a famous late night TV host. A Series A Twin only becomes available on the market once every 5 to 10 years.

As many know, immediately after creating their own Vincent motor the two Phil's (Vincent and Irving) marketed the Series-A Comet Single and the TTR racer. This would have been around 1934 or 1935, in the midst of the Great Depression. The first Series A Twin was introduced in October 1936. Selling any motorcycle was a tough job and HRD was a very small company. Working on a limited budget and needing desperately to sell what they had built, they definitely had some challenges. However, the engine and motorcycle performed well and they began to sell this new all-Vincent model.

As legend has it, Phil Irving saw two overlapping engine drawings and realized it wouldn't be too difficult to turn the single into a twin. In theory he was correct. In practice, it was a little more difficult. The new twin engine wouldn't fit in the existing single frame, so modifications were made to accommodate it. In the downturned economy of prewar England in 1936, Phil Vincent announced the new Series-A Rapide Twin would be available to a limited number of buyers. These buyers would have to have the money and desire for “the world's fastest motorcycle”.

A legend was born with the new Vincent Series-A Rapide; one of which has never lost its dazzling appeal across the decades of time. The bike proved quickly to be what Phil Vincent had claimed; to be faster than any other production motorcycle. In fact, it was faster than any car at the time as well! This was quite a statement for such a tiny manufacturer like this in Stevenage, England and a stunning feat to pull off. Owning one of these light, blazing fast machines gave you some serious bragging rights. The new large engine, created power that was difficult to harness at first. There were transmission issues, clutch issues, and fragile frames with which to deal. Of course, the bugs were addressed steadily and eventually resolved. After World War 2, the whole layout of the machine would morph into the Series-B Rapide and beyond.

The Series-A Twin was first shown in late 1936. Deliveries of this model began during 1937. By the works records of this Series-A Twin, the engine number of this machine is assumed to be made in the last month of 1938 (V1016). It was one of the early production units. From the short time that this bike was manufactured, all production was subsequently stopped within a few months. Few Series-A Twins were produced overall. No matter how proud you may have been of your bike, the demands on every English citizen were great during the Depression -- for every manufacturer, buyer, and within every aspect of life. 12 months after purchase, parts for your new machine would be almost impossible to get. This would prove to be true for gasoline, tires, or anything else needed to operate your machine. The Big War changed everything -- staying alive, finding food, finding or creating shelter from bombs, being drafted in the war itself, or otherwise enlisting to fight in the war. The war effort became the main priority. Those working in the motorcycle industry were transforming their own facilities overnight to make weapons or equipment for the war.

This led to these few Series-A Twins, being placed aside in the shed until their owners returned from the battlefields of Europe. This would be five to six years later for many of these veterans to return home to their bikes. Perhaps a few Twins may have endured on the roads during this time; if they could get some petrol or find a patch for the worn-out tires. There were other hazards to deal with though. Another issue that arose was that some of the bikes may have been scooped up by metal scrappers while their owners were away. The demand for steel, rubber, and aluminum at that point was a life-or-death matter to the entire nation. Some of these bikes may have been melted down to their base metals.

By the end of the war, much had changed. Some of the limited number of machines were now either gone or unusable. Parts for the new Rapides didn't fit for the old ones and many of the early Twins just lingered in sheds or garages. While some continued to be used and became well-worn, others may have been scavenged for parts to keep their brothers on the road. The forward frame #DV 1755 was made near the end of production. This meant that the bike benefitted from strides in improvement which were made to harness the power and stress of this fast, new engine. There is no discernable number on the rear member. We know that engine # V1016 was built in December 1938. Along and with most of its other parts this was sold to the “Guru of Series-A machines”, Bob Stafford. Likely in the 1950's, Stafford obtained the current frame #DV 1755.

Stafford held onto this machine and frame as a basket case until the about 1977, when he traded it to David Dunfee in the United States. Dunfee bought the basket case from Bob Stafford in boxes because Stafford needed a Red Rapide engine and Dunfee had one. They traded for the engine and monetary consideration. Dunfee didn't have the ability to rebuild the bike and held onto it while looking for an assembler. He found a fellow motorcycle club member who said he could do the job. However, after a few months Dunfee was told that the club member “just didn't have enough time”. Dunfee then ran into Carlton Palmer who had a Series-A for sale that was assembled but in very rough condition. He had heard Chas Williams was looking for a Series-A. Williams was willing to give David $10,000 -- for the basket case alone -- and Dunfee bought Palmer's bike.

Chas Williams got a nice engine and frame with the vast majority of parts. He was the kind of man who wanted to do his own work and do it to a high standard, so this was a good opportunity. I knew Williams well enough to know that he was a master assembler and machinist who spent most of his free time and adult life working on Vincent's and Brough Superiors. Dunfee bought Palmer's bike and Williams went home with a smile. This would be where he was to begin his work on what has been called “the rarest and most desirable of all motorcycles.”

Williams worked on this bike for decades. He restored it using the majority of original parts from the early bike combined with a frame made from a model produced slightly later in the same year as engine. This frame incorporated many improvements over the earliest units. Williams even constructed a test bed to bench run the motor. The bike is stunning in every regard. Williams kept this one close to him at all times, housed in his beautiful home overlooking the Pacific in Palace Verdes, California.

At the time the bike was acquired by Bill Melvin, it was only waiting for two components that Williams hoped he could find in original parts: two small levers that operate the compression release mechanism. Unfortunately, Williams passed before he was able to source the levers or finishing wiring the bike. We have since acquired his collection and finished these restorations. The bike has been recently run a few times. Runs and stops well, it could use some final sorting of spark, timing, and brakes.

It is a joy to behold and such an honor to have the “Mother of All Fast Iron” in our possession. It's not unrealistic to think that perhaps both Phil Irving and Philip Vincent themselves very likely sat astride this machine or interacted with a new owner about how to service or instruct him on its use. It has a long and fascinating history of ownership by long-time members of the VOC community. We owe so much to the likes of Bob Stafford, David Dunfee, and Chas Williams for their foresight and enduring efforts to preserve the finest of all motorcycles: this Vincent HRD Series-A Twin. Without their knowledge and efforts, I doubt this machine would have survived. It will be a wonderful addition to any collection or museum as one of the most pristine, rare, and beautiful motorcycles every created.

A video link of the bike running can be seen here: https://drive.google.com/open?id=1YBPm44gVZ4c2-qTTGTynC-QqVCUxhaMA

If you have further questions or inquiries, please contact Bill Melvin 616-450-0691 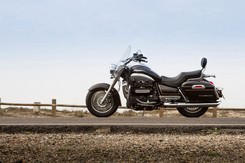