Enthusiast Motors is pleased to present this absolutely stunning 1949 Harley-Davidson EL "Resto-Mod' with an original '47 sidecar for your consideration.

This EL has undergone a no expense spared, 4 year nut and bolt restoration utilizing a combination of NOS and Reproduction parts and is ready to bring home best in show trophies wherever it goes!
The frame on both the EL and sidecar have been powder coated, while the rest of the bike was painted in a gorgeous combination of Flight Red and Daytona Ivory, which are period correct H-D colors, albeit they were never used together from the factory. It then was painstakingly hand pinstriped to complete the job.
All of the chrome and bright work is in mirror like condition and looks better than when this EL rolled out of the factory in Milwaukee. Note the extremely rare NOS Balance Master 'balance rings" on the wheels!

The engine is a Pan/Shovel hybrid that has been completely rebuilt along with the transmission. The build included new STD Panheads on top of Shovel jugs that were bored .20 over resulting in a 1200cc displacement, Weisco pistons and a mild Andrews cam were selected for the engine during the rebuild process, Carburetion is handled by a S&S Super E. The engine starts easily (once you know the sequence), idles well and rides perfectly. It has only been ridden 86 miles since the rebuild.

The transmission is a four speed, with no reverse, a foot clutch with a tank shift. A Primo belt drive has been fitted for the primary with a chain for the final drive.

Being a vintage Harley, it does drip oil out of the vent tube located behind the primary but that is the only leak on the bike.
The only imperfections visible on this bike and sidecar are a small chip on the upper left hand corner of the side car, mild chipping on the sidecar frame where it mounts to the motorcycle and a chin rub on the rear fender. The sidecar is drilled for a OE style H-D windshield and one is included in the sale. The left hand crankcase was replaced and re-stamped with the original numbers before the previous owner purchased the bike, it is believed that it was replaced due to a previous catastrophic engine failure. When the previous owner was living in New Hampshire the bike was inspected and certified by a representative from the New Hampshire DMV and issued a clear title; the bike currently has a clear Arizona title in our dealerships name.

This motorcycle is sold as is, where is, with no warranty.
Buyers in the state of Arizona will be responsible to pay any applicable state taxes and fees!

Thanks for looking!
-The Enthusiast Motors team

Update 04/19 : Due to multiple complaints of the text not being legible we had to end and relist the auction. We apologize for any inconvenience and if anyone is still having issues reading the listing body, please message us directly for a copy! 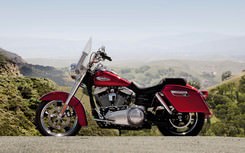