Not many of these originals still exist.
The Yamaha HL500 was an incredibly important motorcycle for the Japanese marque, made all the more remarkable by the fact that it wasn't actually built or designed by Yamaha. The HL500 started as an an idea in the mind of Swedish motocross legends Torsten Hallman and Sten Lundin in 1975 when they were both working for Yamaha of Sweden.

The interest in the bike was so significant that Yamaha finally came around to what Hallman and Lundin had been telling them for years, they decided to create a factory replica of the Swedish-Japanese HL500 and sell it through official Yamaha dealerships.


200 were produced in 1978, and 164 in 1979. There was some error with the frame production in 78 so this was improved in 1979. This is No. 35 which left the Triump factory in 1979 and it is extremely well maintained and well restored. It is road legal in Norway and put on light for enduro driving, but has not been driven offroad after restoration. The bike deserves to be either used as intended or a place in a museum.

Have a friend that works with thransport so that shuld be sorted. 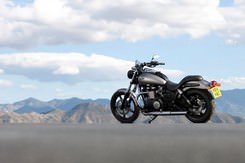