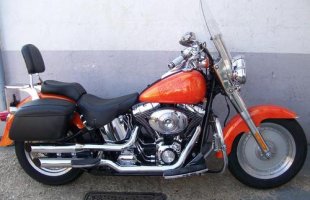 What a beautiful motorbike!
This is the 1450cc fuel injected model Fat Boy which has had just three owners in its lifetime and judging by the condition of this machine were meticulous owners too - it is stunning.
This bike was first registered on the 19/10/2001 and comes with service history. all its books. both keys and alarm fobs. all previous MoT certificates and various bills for all the extras and servicing.
As you will have noticed this is no ordinary Fat Boy. the first obvious change to the bike is the beautiful custom Pearlescent Orange paint job which as we have shown in the pictures has the Harley Davidson emblems faultlessly airbrushed in the background - trick as you like! Then there is the host of accessories fitted over the years which are as follows - rigid leather saddlebags. chrome master cylinder. chrome clutch & brake levers. billet bar grips. chrome switch housings. chrome key caps. chrome mirror kit. pillion padded footboard kit. sissy bar incorporating a chrome rack. chrome engine bars with cruiser style foot pegs mounted. detachable touring screen and finally a set of must have Screamin Eagle cans.
This truly is a stunning machine with no expense spared and the third owner who purchased the bike back in June 2012 paid just short of £11. 00 with a bill of sale present and an insurance valuation certificate for £11. 00 - Don't miss out! 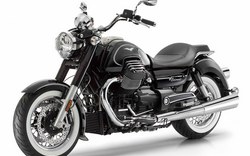