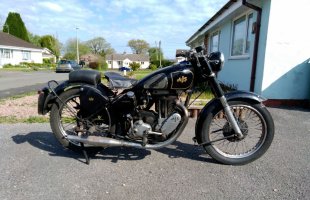 Here for sale is my 1949 AJS model 18 500cc single. I bought this bike in 2016 and it was my daily rider, used for touring, commuting and VMCC runs. I continued to use it daily until I lost my license due to health reasons in 2020 and it has been sat in my garage since then. I have turned it over, freed off the clutch and started it fairly regularly and it still starts easily and runs smoothly, although I haven't ridden it, due to my lack of license.
Due to its age, it is tax exempt and no longer requires an MOT. I wouldn't recommend riding it home though, until you have given it a safety check of things like the brakes, although they are probably fine.
The bike is in honest, oily rag condition, with plenty of patina, showing some of its 73 years of age. The chromework looks much better in the photos than it does in real life - the exhaust and the rims are quite pitted with rust. As I was using the bike in all weathers, this didn't worry me. The front forks and wheel are from a later model, although I couldn't tell you which one. This bike is definitely one for riding rather than showing, although it would provide a great basis for a restoration, if that is your hobby.
The front mudguard has rotted through, but a replacement is included with the bike. I never got around to fitting it again due to using the bike in all weathers. The spares and books/paperwork shown in the photos are included with the bike. I don't know much about the history of the bike and I never checked if the engine number matches the one that it left the factory with. It matches the logbook and for one of this age, you have to apply to the AJS Owners Club to get them to search their records. Again, as a daily rider, this was never a concern for me.
I found this bike to be amazingly reliable, never requiring more than basic fettling to keep it going. I am now accepting that I won't be able to ride again, so it is time to move it on to someone who can appreciate it. 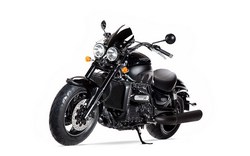