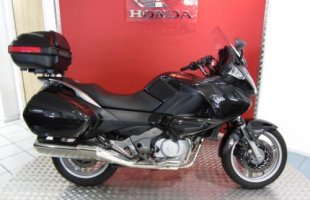 The middleweight Tourer market is noted for a real lack of variety of machinery on offer. This is a real shame as there is a real need for many riders looking to source a motorcycle capable of touring. have luggage carrying ability and fuss free shaft drive with an engine capacity of around the 600-700cc mark. Honda identified this need many years ago with the launch of the Deauville. This bike is sometimes seen as half a Pan European as it offers half the engine size. feels half as light and is almost half the running costs too. For sale here we have a late model Deauville in 700cc form. It is just over a year old and has covered just 8. 00 miles from new. It comes fitted with the wider pannier lids and a colour matched 45-litre top box which further boost the already generous carrying capacity. There is also the balance of Honda warranty and Hondacare assistance for complete peace of mind. If you want to buy one of these new. then you may well have missed the boat as Honda and pretty much all the dealers have sold out. This could be your best bet for the latest possible example you could get. It would certainly be a good contender to be passed off as new! Come and see it for yourself and don't forget that we always offer top prices in part-exchange. We open every day of the week too! Call us now on 020 8668 8856 or 8851 with any questions that you may have? With only 8500 miles on the clock. the condition of this Deauville is as good as new in every way. Featuring a genuine Honda. colour-coded. extended pannier set and 45-litre top-box with carrier. Finished here in the beautiful. jet black colour. with a modern metallic twist. It looks stunning. This is one of the last ever Deauvilles supplied in the UK. so considering it's almost £2000 off of the new price. why not? As with all the best examples on offer. this is a privately owned. 1 owner from new machine. Doble Motorcycles stock number 9400. 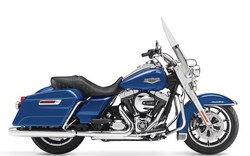