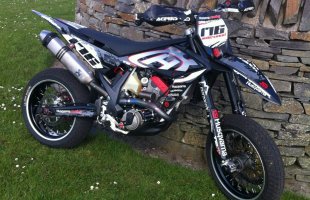 This is a championship winning bike built with the finest parts that money can buy spec as follows:

Factory Billet RR triples & risers
Factory Marzocchi 50mm Forks with Black Nitride coating.
WDS air shock with custom footShortened by 30mm black powder coated swing arm. Black bodywork
Crispy designs graphics
Factory RR Tubeless wheels
Michelin Slicks
Acerbis x-strong handguards
X fun Gear & brake levers
Carbon chain guide & exhaust heat ShieldSpecial parts Carbon Skid plateCarbon Frame guards
Beringer Billet Bro 10 Master cylinder
Brembo factory bronze Billet caliper
Brembo narrow track race disc
HEL brake lines
Full Titanium Akrapovic exhaust
STM slipper clutch
Power commander
Blueprinted engine
Polished gearbox
Ported & polished gas flowed head
Machined and lightened high comp piston
Re-profiled camshaft
Switchable maps
Custom fuel & ignition maps
Modified throttle body
Modified air box
Custom Ram air
Custom opened up silencer
Engine oil condenser
GMX oversize radiators
Ultrabatt Lithium battery The bike was originally built for the 2012 Supermoto season by Motosupplies & was one of 2 bikes raced by Douglas Cunningham to win the 2012 British Masters Championship & came second in the 450 championship. I purchased it at the beginning of this year & set about improving the bike by upgrading the suspension. brakes & making the bike lighter. I did this by fitting the WDS shock which knocks quite a few kilos off the bike as does the ultralight lithium battery. I have only managed to do a couple of trackdays & 2 race meetings. This year is my first racing supermoto so I'm a total novice at racing but the bike performs amazingly & I even managed to get a podium on my second race meeting in the B group of the British championship. I know in the right hands this bike could easily run at the front of any supermoto race in the world. Im fairly sure this is the highest spec 449 / 511 platform race bike in the world! The engine development work has been done by Northmoor engineering one of the top tuners in the country & the bike has been mildly tuned & set up to produce 60bhp. the bike has around 25 hours on it The topend has just been inspected. valve clearences done & new gaskets. These BMW based engines have a reputation for being very robust & easy on maintenance. Oil has been changed after each race meet or trackday. Brake pads are new allround. Forks just serviced with new oil & seals. Bike will come with a box of spares. Spare standard shock set up for Supermoto. half a dozen oil filters. a selection of sprockets spare brake pads etc.  It really is hard to sell this bike & I'm only selling as a couple of mates are setting up a race team for next season & the team has decided to run KTM machines & I'd like to join them.  I'm not interested in swaps or offers. unless you have a well set up KTM 450SMR you want to swap. If you want to make the bike a bit cheaper I will sell without the WDS shock for £500 less & it will come with standard shock revalved for supermoto with a special parts pre-load adjuster & 0 hours use. The bike is in excellent condition but it is a race bike so does have a few scratches etc If it doesn't sell before. I will be using the bike in the next couple of rounds of the British Supermoto races so feel free to come and have a look at the bike.  Please no canvasers or silly offers & no offers to pay with paypal or requests for me to deliver the bike to another country Thanks. Any other questions. please feel free to ask.
❮ Prev Husqvarna motorcycleNext Husqvarna motorcycle ❯ 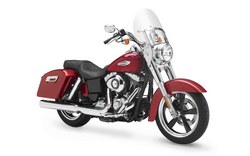