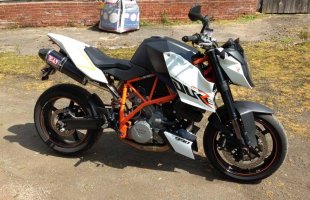 This is easily the nicest Superduke R for sale at the moment!

The 2011 model as you may know was the last of the proper R versions with the single seat. more powerful engine. and Akrapovic downpipes.   In 2012 they introduced the watered-down double seated R version which combined the Standard version and the R version.   This is why I bought this model over the '12 model originally.

In addition to these features. the bike has Yoshimura carbon exhausts. de-catted Y piece and a power commander V fitted.   The bike was custom mapped (not an off-the-shelf map) with not one but two maps. It was mapped once with the baffles in. and once with them out and has a switch under the seat.

This means you can have them in or out with the bike running perfectly either way! The work was done by Tim Blakemore Racing in Bristol and all the receipts are present.   I spared no expense having it done properly as I was planning on keeping the bike long term.

Please see the Dyno printout on the last photo. it is 134hp at the wheel with the baffles out so approx 140hp at the flywheel! It's a jump up from the 115hp in standard form.

I have also fitted a Rizoma tail tidy and small Led rear indicators. I have not get round to fitting smaller front ones yet.

The bike has 2. 00 miles on the clock. all books. two KTM stamps (FSH). both keys. and is in excellent condition throughout.

The reason I am selling the bike is because my Carpal Tunnel Syndrome is playing up and I can't ride at the moment without getting numb hands.

Please contact me via Motorcycles-for-sale or and I will give my number out to serious enquirers.

Viewing welcome in Hereford although photo ID will be required prior to viewing and no test rides without cash and insurance.

Please check my 100% positive feedback for piece of mind! 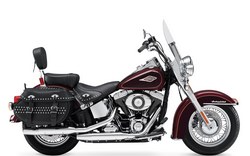