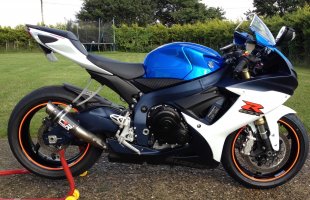 here we have my much loved gsxr 750 l1. i bought her new last june and fitted a few nice bits ready to take her to italy on a road trip. since then shes sat in my heated bike garage with my other bikes and ive only ridden her a couple of times this year. the extras include a genuine suzuki double bubble clear screen £110. genuine suzuki seat hump £130. genuine suzuki tank pad £25. asv short levers £180. racefit growler titanium exhaust can £600. all the original parts are bubble wrapped and go with the bike. full service history. 2x keys and all paperwork etcthe bike is like new with absolutely no scratches or stonechips whatsoever. i promise you will not be dissapointed its in mint condition as are all my other bikesthe reason im selling her is because we are buying another house and the money will come in handy. but i am not desperate to sell and will keep her if i have toplease remember this bike is as good as new when making me an offer. and you are welcome to come and have a lookcash on collection or a cleared bank transfer only. tel 07912114656 or 01366 502274
i am more likely to respond to my mobile if you want a quick response. or just to chat
thanks for looking 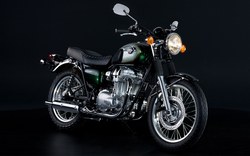