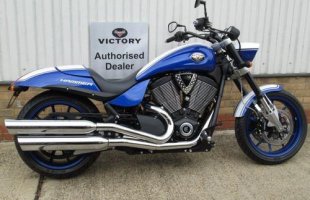 These 2010 Blue Hammer Sport's are in limited supply. they are genuine Hammer sport's with lightweight wheels. They are fitted up with £1100 worth of stage one exhausts and come with two years Free servicing or 7500 miles which ever comes first. We only have one left of these Hammer's at this price. they are new but not current model year so we can offer such a fantastic deal. The retail price of this machine in in excess of £15. 00 so grab yourself a bargain at only £12. 95. They are BRAND NEW unused . These machines are not for the faint hearted. powered by a 1731cc fuel injected engine producing 104lbs ft of torque. Its power is pushed through the six speed overdrive gearbox and printed onto the tarmac by its 250 section rear tyre. Victory have been making machines for over 10 years and strongly heading towards being the market leaders in cruiser's. The quality. finish and ride make these bikes truly awesome not only to ride but to look at aswell. We have been selling Victory machines for over 10 years and pride ourselves on customer care and satisfaction. We currently have over twenty new bikes in stock from Vegas 8-ball through to Vision and a few used machines. Offering spares. servicing. mot's and tuning. This Hammer S is live and in stock now. we can also offer low rate finance (STS). for more details then call March 01354 660366 or for afterhours call Mark 07909983455 or Richard 07860361920 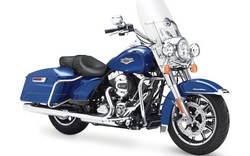