This is my very special (and probably unique) RGS Replica:

The Frame & Engine were built by John Gleed who worked with Eddie Dow at Banbury (where the RGS was invented) for all those RGS years…and still lives in the area.

The frame was first registered in 1955 which means no more MoT's.

For the last few years the bike has been registered and used in the Isle of Man with the IoM registration BMN 650 which is not included in the sale.

The bike was ridden as the lead Marshal's bike in the 2011 Festival of Jurby in August 2011 – see photo.

It goes like stink…. and stops extremely well.   In fact. the entire specification is simply the best.   It is an enjoyable hooligan machine!!  That also starts well….

The reason for sale is a combination of Age (mine!) and the need to have a reduced collection of bikes that collect dust.   I only ride in the dry – and that rules out over half of the days in the IoM.

The only work on the bike. other than normal maintenance. has been to ensure that the stainless nuts and bolts stay tight and the petrol tank has been internally sealed and repainted silver due to a slight discolouration along the front. welded seam.   Brand new M40 oil inside. 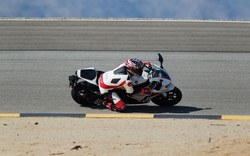